"Shotguns among most popular weapons for criminals in New York City" 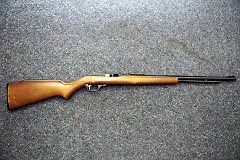 Then There's The Correct Headline: Shotguns among most popular firearms for criminals in New York City

"Shotguns are no longer just for farmers.

For the first time in seven years, shotguns are among the most popular weapons of criminals in New York City.

Federal data show that 394 shotguns were seized from thugs in the city last year - making the weapon the fourth most popular gun among criminals.

Some 3,260 of the 5,913 firearms taken from city crooks were semiautomatic pistols. Revolvers were second on the list of seized guns with 1,637 traced by the feds, Sullivan said.

Unlike handguns, shotguns can be bought legally in counties just outside the city without a permit or an extensive background check. They also typically sell for $200 or less, authorities said.

"There were over 1,100 fewer guns found on city streets in 2007 compared to 2006 - that's more than 1,100 fewer chances for gun violence to harm innocent New Yorkers," said Mayor Bloomberg. "It is an impressive figure that complements the fact that in 2007, the city experienced the fewest number of murders since records started being kept more than 40 years ago."

The so-called "iron pipeline" - the route traffickers use to smuggle guns into the city from southern states - was still bustling however. About 87% of guns seized in the city were traced to other states, Sullivan said.

Bloomberg has been crusading for tougher federal gun laws to prevent weapons from being smuggled into the city.

The average time between when a weapon was legitimately sold to when it was used to commit a crime last year was 13 years. That's up from 9.4 years in 2002, which authorities say is a sign that they are dismantling some gun trafficking operations.

You see, Alison, you can't switch from describing something as a weapon, to as a firearm. Not all firearms are used as weapons, and not all weapons are firearms. I know that to a liberal, under-educated, agenda-driven NY 'journalist' this is quite confusing, but trust me on this one. Create a list of all of the weapons used, then rate where shotguns stand, or include shotguns in the firearm list alone and not confuse them with all of the OTHER weapons employed by NYC minorities to kill innocent people.

Yep. Its hard being a journalist. And then, you might want to think about getting the OTHER side of a story, because without it you are editorializing and not reporting. NYC criminals DO steal an awful lot of guns, and some think that THEY should be the focus of law enforcement's efforts instead of the law abiding citizen, the 80 or so MILLION law abiding citizens, who own guns and have never committed a crime with one.

Then, and this is a toughie too so pay attention, you shouldn't begin the story by acting like shotguns were at one time only farmer-specific. More police in NY State use firearms than do farmers, and by a huge margin hunters employ scatterguns far more than the farmers and police combined, so it might be a good idea to get your head out of the old Farmer Gray cartoons and into the real world.

Now lets talk about how shotguns are purchased. Every gun shop that sells them first institutes a THOROUGH background check, Alison, and most shotguns typically sell for MORE than $200 so I'd check then double-check those figures the police gave you, something you should have done ANYWAY before taking Bloomberg-inspired law enforcement information as gospel.

Criminals will get their hands on any firearm they can, Alison. In a FREE society people can purchase firearms at will, and yes, some of these purchases are made by criminals who've yet to be caught and convicted of being a criminal but welcome to America.

And while I could go on all day about the shoddy reporting, Alison, I'll end this missive by asking, um, where'd ya get that picture?