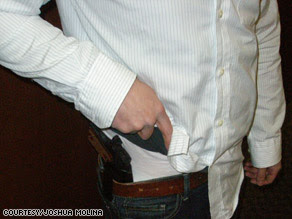 SALT LAKE CITY, Utah (CNN) -- "The senior at the University of Utah gets dressed and then decides which gun is easiest to conceal under his clothes.

He started carrying a gun to class after the massacre at Virginia Tech, but the student says he's not part of the problem of campus shootings and could instead be part of a solution.

Nick, who asked not to be fully identified so his fellow students wouldn't know he carried a gun, says he has had a concealed weapons permit for more than three years. But it was Seung-Hui Cho's murderous campus rampage that made him take a gun to class.

"Last year, after Virginia Tech, I thought 'I'm not going to be a victim,' " Nick said.

And bravo to you, Nick.

But I understand why any college of university is dead-set against allowing students to carry concealed weapons.

The football and basketball teams spend as much time in jail as on the playing fields so imagine letting these felons-on-a-scholarship pack heat. Bad enough when the nutcases flip out, who needs homeys fighting drug battles in the ivy covered halls.

And that's the bottom line. No one can predict when a lunatic is going to let off some steam, but they CAN predict when certain folks are going to play robbers and robbers in their spare time. When I see a kid in a University of Florida varsity jacket who can't use mommy or daddy's credit card because he cannot read the instructions on the register scanner I get the feeling he isn't taking up earth & space science as a major. Why don't these institutes of lower yearning do themselves a favor and run background checks on anyone wishing to enroll, while restricting the scholarships to disadvantaged kids with a brain.

Um, and Thunderwear isn't cool, Nick, so try a tuckable why don't ya.

JR has his take on the matter as well.