Clinton: Playing Field for Her as Candidate Not Even Because of Her Gender 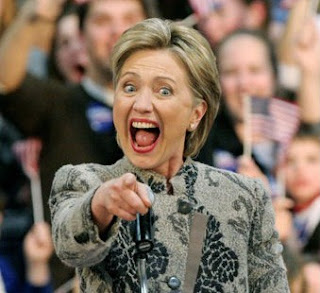 "In an interview with ABC News' Cynthia McFadden to air on this evening's "Nightline," Sen. Hillary Clinton, D-N.Y., says it's tougher for her to run as a woman than it is for her male opponent.

Asked why she thinks so many women may be feeling sorry for her, Clinton said, "I think a lot of women project their own feelings and their lives onto me, and they see how hard this is. It's hard. It's hard being a woman out there. It is obviously challenging with some of the things that are said that are not even personal to me so much as they are about women."

That a girl. Make it about ALL women and not just an unlikeable socialist hag who wishes to be coronated for pretty much no reason at all. At least Obo is half-black and can evoke memories of slavery, but when one is of the gender which has brought us weepy entitlements and nothing more you aren't getting any points for this one, babe.