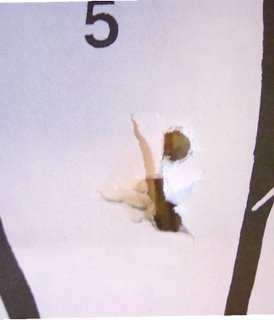 Now remember...I had 6 shots remaining. So I said what the heck. For the first two, I was leaning a little against the wall on my lefthand side, so I took a breath and got down and dirty. The head of the target was pristine so I lifted my aim, braced fully against the wall, and fired the lowest hole you can see on the target. Kept squeezing...SLOWLY now, real slowly, and the last of the 6 was the high one up and a little to the right.

6 shots. 25 yards. 3/4" group. Yes, that is not possible. Yes, you can call me a liar, but I'm really not dumb enough to try and fool anyone with such a target because no one who knows shooting would believe that a compact gun could shoot like that. It did. Shit happens. I have never in my over 40 years of shooting had an under 1 inch group @ 25 yards from a pistol or revolver with such a short barrel. Maybe a $3000 gunsmith special in a Ransom rest, using match ammunition. It's possible, but not likely. 5 of the shots went into a hole under half an inch, and that's plain crazy. I want those bullets back. I'm awful sad I shot them now because they were self-defense rounds I was checking for feed, fire, and fling, and I'll never, ever find ammo that accurate again. Not world class hollowpoints. Not from a bone-stock G-27. And certainly never at that distance.

Once again, they were Federal HST .40 caliber hollowpoints. 180 grains. I'm ordering some more from Streichers online tonight ($16.00 for a box of 50), and I know damn well the accuracy fairy didn't linger long enough at the factory for any more of these suckers to be around, but like I said, they were giving me 2 and a half to 3 inch groups all afternoon at that distance, and that's plenty good for any concealed carry firearm.

We shot the Ruger GP 3 incher as well, and the Double-Tap 158 grainers were cranking out at a hair over 1400 fps. Lisa and I were focusing getting the rounds in as small a group as possible at 25 feet, and the gun and ammo did really well. Lots of big ragged holes, and the recoil wasn't so bad she wanted to stop, not at all. I carry that gun sometimes, was pleased with the ammo, and to my hands the recoil was negligible. 6 rounds in a smidge over 3 seconds produced 2 inch groups, and if I ever need better than that I've gone and done something really, really stupid.

Not a bad day at the range.

That's a good group. Some gun/ammo combinations do very well. I looks like you've found what that G27 likes. Keep feeding it and pretty soon it will grow up to be a G22.

LOL. I've an old 22 that one of my brothers gave me after he shot it out. The rifling is all but gone, none of the mag springs spring, the striker assembly is so frigged the firing pin does what it wants, etc, etc. Keep saying I'm going to send it back to Glock for a look, but the bunch of us have probably fired over a 100K rounds thru the thing and I should just get the parts and do it myself. Cool part is there's still no signs of rust on the slide and the polymer has held up really well considering it was left outside in the sun day after day for years.

Off topic, but do you have an opinion about the P-90?

The Ruger P-90 is one good shooting gun from my experiences with the few I've handled. A tad klunky looking but that's Ruger all over, and give me function over pretty any day of the week unless we're talking about an old Smith or Colt that just NEEDS to be had.