Fun In The Backyard 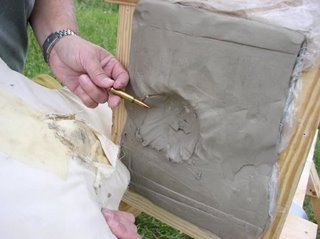 Back when I had property to shoot on, I'd throw together a Fackler Box and shoot bullet after bullet into baggies a'briming with everything from plain tap water to 20% gelatin (NATO dismisses the 10% sort as being unreliable but thats another tale). A baggie is the preferred method of emulating an emulation such as ballistic gelatin testing, and when one is looking to determine penetration they are far easier to set up.

And play with. Open a large enough Glad Bagger and tape leftover barbeque ribs inside, or suspend them in gello to get a better understanding of what a projectile can do to something more closely resembling a homogenous or non-homogenous form, depending on what fun thing you're setting up to splatter across the landscape. Cover it all with some clothing, then some old body armor you found the last time you cleaned the garage, and it's neat to see what new rounds can do.

Bottom line is the fact that an imagination is a terrible thing not to have, as is proved each and every time the old man from The Box O' Truth goes into his yard and does something as stupid as firing a Hydrashok at body armor, and just to piss off the semi-literate, even manages to spell the name incorrectly.

YOU DON'T SHOOT A HOLLOWPOINT at armor. Now, if the senile old dude would have used FMJ's, any cheap FMJ, that would have been a far better indicator as to what a .40 caliber* round might do to reasonably good armor.

BUT, nothing was going to stop him from putting modelling clay behind the set up, because to him and others like him, such clay is a good indicator of human flesh. Forget for just a moment that it is the farthest thing FROM flesh, and use some imagination to think of a reasonably fragile backstop to see what effect the pressure wave would be from such an impact. Or, set up the clay and just punch it. Go ahead. Whale away. You'll knock one serious dent in it because it doesn't rebound, but let me stop before I confuse the old fart even more.

Pressure Wave Theory is the modern, fancy-schmancy way to say hydrostatic shock, but at long last bonafide scientists are looking into this stuff and I always keep an eye out for neater ways to put a hole in things what need a hole.