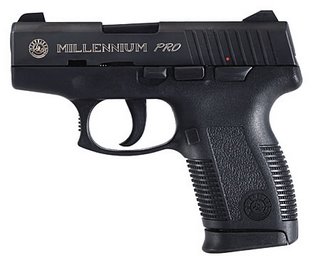 Nice little BUG. Taurus .45, and the 10 round magazine is a plus. Unloaded we're talking 23 ounces, and the only problem is the 3" barrel, but a BUG is a BUG, and that means 180 to 200 grain fodder because the heavier rounds won't be going fast enough for expansion. The point of aim is fairly decent, and slow firing it at 25' returned 3" groups with Winchester 185 grain Silvertips, but it was my first time with the gun and to be realistic, you shouldn't be asking such a weapon to take much longer shots anyway.

I didn't mention recoil because to me it doesn't enter into the equation, but I did manage to empty a mag in under 5 seconds and still stay in a softball-sized group, so the "snappyness" shouldn't be too dreadful for the recoil sensitive. The owner paid $375 out the door, and there have been over a thousand rounds through the pipe with the only failures coming from a balky magazine, and that can happen with any bottom feeder. The trigger felt somewhat heavy, and I'd guesstimate perhaps a 7 lb pull, but it wasn't gritty and while not the best of it's kind wasn't objectionable. There are most likely scads of aftermarket triggers to suit most tastes, but were the gun mine I'd keep shooting and do a buff job to see if it "broke in" some more.