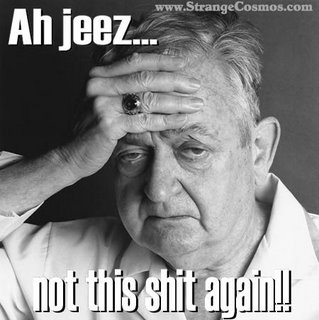 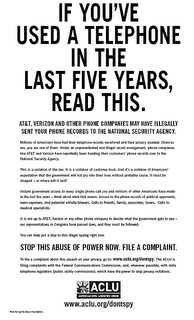 "...each and every legal scholar who has looked at the program has agreed that no laws have been broken.

The ACLU is listed as a non-profit organization. They claim to be non-partisan. But it seems awfully odd that the only members of Congress that are members of the ACLU are Democrats and that the ACLU publicly opposes any proposal sponsored by Republicans. And it seems awfully odd that each time they win a case, they take a larger cut of the settlement than their clients.

The ACLU feeds of the weak minded. They rely on the apathetic uniformed morons who fill out the little form and send it in with their $25 each year to get their little card in the mail so that they can go around saying that they are “card carrying members of the ACLU”. If these people had half the intelligence that they claim to have, they would look into the dealings of the ACLU and come to the same conclusions that we have. That their actual goal is destruction of the United States as we know it."

Truer words are hard to find, as Stop tells us of the latest attempt by the ACLU to weaken America. The upside is the fact that many of us will pass this nonsense along so that those who aren't so gullible may be forewarned. The downside is the fact that the tin-foil brigade will dig deeper into their pockets to fund such atrocities after being frightened out of their half-wits by yet another sky-is-falling doomsday scenario provided by elements of the Democratic Party who've brought you slavery, Ted-The-Lady-Killer-Kennedy, and lets not forget the avowed lefties who started the whole American Commie Liberals Union to begin with.