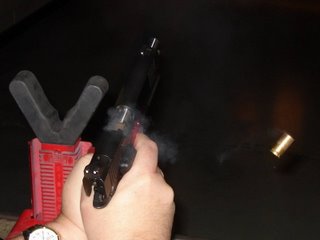 Was sent this pic, but the return email is now inoperative and I've one question:

The pistol-rest off to the side; Can't remember what their called but do remember using one and they were pretty good for benching a new weapon or load.

I'd be interested in knowing the manufacturer, so please email me back and I promise not to ask why your grip was so bad the gun is flipping up to the sky like that.

EDITED TO ADD: Lisa says that I can catch more flies with honey, so I'm going to try. Okay, here goes. Betcha the recoil was a little bit stiff and you were probably resting your forearms on a rest while shooting, so that's the reason the pistol looks like it is aiming at the moon. Happens to me sometimes, too. Then again, my hands aren't all fat like that and I can get a much better grip but I shouldn't be surprised when other people who eat too much have problems doing all sorts of things well, and sometimes it's genetic too. Also, it can't help that the gun is a Kimber and wishy-washy wristies are far more likely when shooting something with a girls name, so that's not your fault either.
Posted by Fits at 5/21/2006 08:33:00 PM

You didn't mention the wristwatch worn facing the inside like a queer either. You should get points for that.

LMAO. I did at first, then deleted it when told it was cruel. Wasn't 'cruel' at all 'cause nothing sillier than fat ugly hands with a watch worn like that. Shit. He'll never answer me now.

Based on the color that rest is probably either Lee or Hornaday.

I was in error. It is an MTM. You can find one here:

At the bottom of the page.