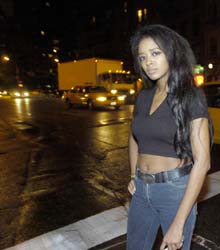 "A group of cops didn't play nice with a Playboy Playmate, leering at her body and shoving her to the ground in Chelsea after a cab driver falsely claimed she threatened him with a gun, the model says. "I felt assaulted," said Stephanie Adams - the first openly lesbian Playmate - of the incident near her home at 11 p.m. Thursday. "They pulled guns on me and there were several of them," the 35-year-old stunner said. "They know what happened was wrong, the way they looked at my breasts and crotch. I was wearing tight-fitting pants and they could see I didn't have a gun, but they forced me down and pushed my face into the ground."

Okay now. She throws a hissy fit because the cabbie didn't get her close enough to her apartment, and this happens all the time what with people double and triple parked, emergency vehicles, deliveries,or even just too many people milling about an area. She refuses to pay him and according to him claims she has a gun. The cops arrive and don't even frisk her, but they...GASP...stared at her.