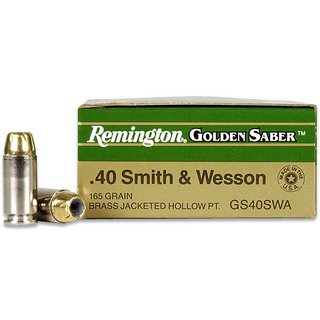 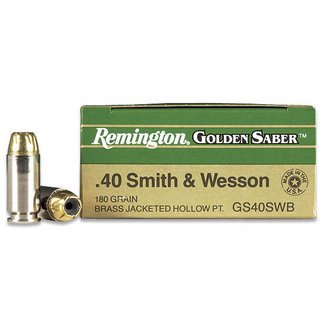 Sticking with Remington for a time, Jay chrono's the 165 grain Golden Saber @ 1146 fps from a Glock 23, and the 180 grainers @ 996. Expansion from both weights averaged .74". Neither he nor I have ever experienced a failure to feed, fire, or fling, and since Remington manufactures top of the line hollowpoints for self-defense I'd use them in a snap if Federal HST, Winchester Ranger-T's, or Starfire's were unavailable. The bad guy might not even know the difference, but with eyewitness reports from HST and Ranger usage, it's a case of what you know versus what is possible. When in doubt, go with the more accurate round that works the best in your own gun.

Post Shot: Virtually all of the munitions we take a look at are considered top of the line products, with no target-ammo thrown in just to stay on the cheap like some people we know. If we can get our hands on a round it get's chronographed and fired into water to examine expansion. We're also aware that barrel length is the single most important feature concerning velocity and therefore terminal ballistics with handgun rounds. Handgun bullets are designed with a quick-stop in mind, and adding an additional 400-500 feet per second can make these munitions more deadly than varmint rifles such as the M-16 and it's variants.

A reasonably hot .357 magnum round of 125 grains can exit a 18" carbine at 2400 fps. Bear in mind that this is a true hollowpoint and not some Geneva Convention full metal jacket. Such a carbine would, and undeed has returned greater terminal ballistics against soft targets than anything of the AK variety.
Posted by Fits at 9/23/2006 11:51:00 PM