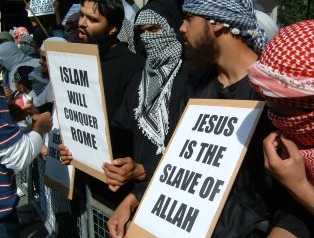 Yes, that's akin to professing the existence of the tooth fairy. Some things are just a fantasy. I took the pic from Chas, and how interesting is this.

Moslems complaining about the Pope being unfair to them, and using rhetoric far more hurtful than anything anyone dare say about their barbaric cult.

Well, that's not true. Lots of us dare say stuff about the cult of islam but we don't get the ink the moslems do because the MSM loves them so, and keeps what real people are feeling under wraps sp as not to A.) Scare the sheeple, and B.) Incite the barbarians to riot.