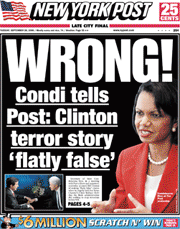 The Secretary of State says the former president was basically full of beans when he lashed out at Fox News' Chris Wallace Sunday - wagging his finger and bitterly accusing the Bush administration of abandoning the search for Osama bin Laden before 9/11.

"They had eight months to try, [and] they did not try," Clinton shouted. "I got closer to killing him than anybody's gotten since."

Clinton railed at "all of the right-wingers who are attacking me now" and denounced Wallace's "conservative hit job," demanding to know "how many people in the Bush administration you asked . . . 'Why did you fire Dick Clarke,' " the anti-terrorism chief.

But was Clinton telling the truth? (Remember the last time he wagged his finger in public?)

Secretary of State Rice suggests not.

"The notion somehow for eight months the Bush administration sat there . . . is just flatly false," the former national security adviser told The Post's editorial board yesterday. "What we did in eight months was at least as aggressive as what the Clinton administration did in the preceding [eight] years,"

Firing Clarke? Far from it, she noted: He "was the counter-terrorism czar when 9/11 happened, and he left [in 2003] when he did not become deputy director of homeland security," as he wanted.

Clinton insisted that his version is backed both by Clarke's book and public testimony before the 9/11 Commission.

In fact, Clarke told the commission a very different story during hours of private testimony behind closed doors - one that jibed with a 2002 background briefing he gave to reporters.

Back then, he said: "There was no plan on al Qaeda that was passed from the Clinton administration to the Bush administration. . . . [a] plan, strategy - there was no, nothing new."

Indeed, Clarke said, the Bush team in 2001 "changed the [Clinton] strategy from one of rollback [of] al Qaeda over five years to a new strategy that called for the rapid elimination of al Qaeda. That is in fact the timeline."

Bush, he added, took action on several "issues that had been on the table for a couple of years," such as instituting a new policy in Pakistan that convinced Islamabad "to break away from the Taliban" and boosting "CIA resources . . . for covert action five-fold to go after al Qaeda."

In fact, a 1999 Clarke after-action memo - the one top Clinton aide Sandy Berger later stole from the National Archives - identified national-security weaknesses so "glaring" that only sheer "luck" prevented a cataclysmic attack back then.

And, as Clarke told the 9/11 Commission publicly, there was nothing the Bush administration could have done that would have prevented the attacks.

Sure, he tells a different story now. But that, he admitted, is because of his opposition to the Iraq war, which he believes distracted from the War on Terror.

Secretary Rice was a lot more honest, explaining yesterday that there was no full-scale War on Terror "the way that we're fighting it now" - by either administration - before 9/11: "We just weren't organized as a country, either domestically or as a leader internationally."

The blame for 9/11 goes back fully 25 years, and includes both Democratic and Republican presidents.

At the same time, the Clinton years were bookended by al Qaeda bombings - the 1993 attack World Trade Center attack, and the October 2000 suicide assault on USS Cole - with plenty of blood spilled in between.

Clinton effectively slept through it all - and now he's trying to rewrite history.

With the following type of response, Clinton difuses the issue and comes out looking like a confident leader

"Now listen, Chris, I can't divulge what went on behind close doors but rest assured that my administration did everything it could to find Osama bin Laden. We didn't and for that I'm sorry, but to say we didn't try is just wrong. Next question."

But he couldn't help himself. The man STILL can't keep it in his pants.