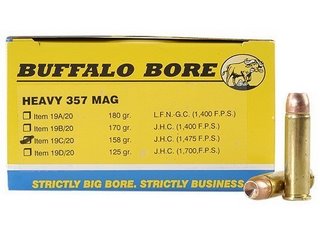 For the time being, at least.

Double-Tap has stopped making it's 158 grain Gold Dot loads, and it figures that these have been my carry round for some time.

#2 were PMC Starfires in 150 grains, and PMC has just announced that they have discontinued this product.

How wonderful. I guess it's over to Buffalo Bore, for there is no reason to carry a weakly loaded .357 magnum for self defense.

I gave Double-Tap my business back when Mike McNett was starting up and answering emails and cranking out cartridges like no one else. The Buffalo guys were always too big for their britches, seemed to know very little about modern handguns, but now appear to be the only game in town for hot .357's.