Ollie Has His Say... 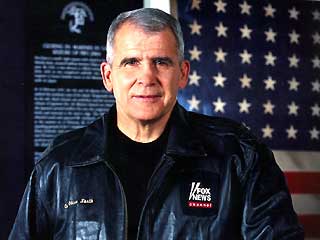 "...Over the course of the past week, there is hardly a talk show in America that hasn't run the tape of Clinton's tirade and then proffered instant analysis of the former president's performance. One jabber-jawed host even asked a guest after playing the clip, "Who won that exchange between Wallace and Clinton?" as if he were interviewing the judges at the "Friday Night Fights."

Not one of the "experts" has, as yet, observed that in all of this, the biggest loser wasn't on the screen; it was the American people. The tape of a former president arrogantly proclaiming on international television that he personally authorized the assassination of a foreign foe may be great stuff for the screenplay of "Rambo V," but U.S. and international law specifically forbid it. Over the course of fighting the jihad being waged against us, Mr. Clinton's intemperate words will come back to haunt us many times over. And of course, he won't be the one to pay the price.

Apparently neither violations of law nor increasing the vulnerability of the American people seem to matter much to Mr. Clinton, his political cronies or his allies in the media. The silence has been deafening from the barons of bombast and political potentates who went nuts last year when Rev. Pat Robertson suggested that Venezuela's tin-horn dictator Hugo Chavez should be "eliminated." Then, there were calls for an investigation of Dr. Robertson. Not so for Bill Clinton.

For the record, Mr. Clinton proudly claimed to have broken a long series of U.S. laws:

— Executive Order 11905, signed Feb. 18, 1976, by President Gerald Ford in response to the Church Committee. Section 5(g) of that order states "no employee of the United States Government shall engage in, or conspire to engage in, political assassination."

— Section 2-305 of Executive Order 12036, signed by President Jimmy Carter on Jan. 24, 1978, broadens the prohibition from "political assassination" to "assassination" generally.

— Executive Order 12333, signed by President Ronald Reagan on Dec. 4, 1981, specifies that assassination is against the law and contrary to U.S. policy. Section 2.11 of the order, which is labeled "Prohibition on Assassination," says "no person employed by or acting on behalf of the United States Government shall engage in, or conspire to engage in, assassination." The next section (Section 2.12) states "no agency of the Intelligence Community shall participate in or request any person to undertake activities forbidden by this Order."

Without hubris, I must acknowledge that I wrote, "staffed" and presented Executive Order 12333 to President Reagan for his signature. I was asked then — and have been many times since — if I thought such a prohibition was important. I did then and I do now. And since no chief executive has ever rescinded them, it seemed as though they did too — up until Mr. Clinton's petulant outburst.

Ordering the assassination of a foreign national is arguably more important than lying about a tryst with an intern in the Oval Office. So where is the "shock and awe" from human rights standard bearers who still complain about the so-called abuse of prisoners at Abu Ghraib and the U.S. detention facility at Guantanamo Bay? Do they not care that Mr. Clinton ordered an assassination?

And since presidential gindings — orders for the CIA to conduct covert operations — are all highly classified, shouldn't those who reveal them be held accountable?

Doesn't apply to Democrats as a whole, Ollie. Laws are made to be broken as liberals intitiate drastic measures to retain power for power's sake.