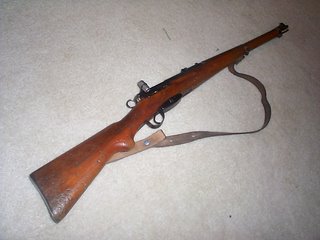 This is a rifle that's never been to war.

Not a one of them. Anything said about a military weapon that never saw duty is from a plinking viewpoint only. So then; as a plinker the Swiss K31 is fairly accurate. The 7.5 X 35 round approximates a run of the mill .308 with regards to terminal ballistics, and the straight-pull bolt action, once gotten used to, is smooth and fast. With a round ready to spring from the magazine and into the chamber, that is. Try working the bolt without a cartridge to feed, and it's tedious and feels too odd to describe. But that's perfectly alright. The rifle does what's asked of it, at least for the several or so hundred of rounds we sent downrange.

The 9+ pounds with six-round magazine full and ready to go lent the rifle both stability and recoil buffering. For my money, the K31 is a softer shooter than an M-14, but this particular one was nowhere near as accurate and in all probablility the cheap surplus ammunition we were cranking out had more to do with where the holes went than the rifle did. 174 grain @ 2800 fps RUAG's are notorious for being tack-drivers or shot-shells depending upon how the factory workers felt on any given day, or so I am told. The adjustable sight was easy to fiddle with, and that about sums up the whole gun. 3" groups @ 50 yards is nothing to write home about but coming from a $110 rifle, who really cares. 480 rounds set us back $152, and the stuff was non-corrosive so cleaning the Swissy wasn't a chore.

The ammo is hard to come by, the rifles, every one of them, need work to the stock, but since the go-gear appears first rate I'd have to say that for a hundred bucks or so, why not. A little refinishing and like the Frogs say, Vie-Oh-La. You've got yourself a smooth bolt-action rifle chambered for fairly powerful rounds. Far from a great longarm, but for the price quite hard to beat.

The Swiss made about 600,000 of 'em, and from what I understand as many as half that amount have been flooding into the states. But remember, I have no area of expertise regarding the where's and when's of these rifles, as I leave that to the C&R guys who fuss over such stuff. Give me something to shoot and I'll form an opinion, and that's what this is. If I did get my C&R license, and happened to come across a decent K31 I would buy one. But only at so low a cost. Going retail through a dealership and the price is going to rise, and tacking on your local neighborhood FFL fee would make the weapon too pricey for what it can do.