Loons At A Crossroad 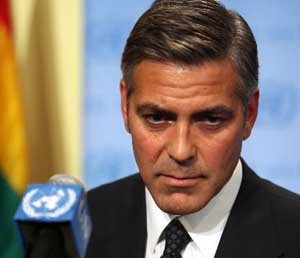 "LIBERALS like George Clooney may be faced with a genuine dilemma regarding American interventionism.

Last Thursday, a well-meaning Clooney asked the United Nations to stop the slaughter in Darfur. Given that body's ineptitude and lethargy, it's highly unlikely to send troops to replace the 7,000 African Union peacekeepers whose mandate ends this month. Some 200,000 are already dead; 2.5 million more could follow.

We have another genocide like Rwanda on the horizon. And there is only one entity realistically capable of putting a stop to it: the United States military.

Let someone kill the people of, and continue to threaten the United States of America, and lefties scream to the heavens that it's all a misunderstanding. Ah, but Africa. When something happens in Africa they rush to the UN with visions of military intervention, and are too godawful dumbass to understand that NOTHING will be done to save a people who cannot be stolen from. If they contributed millions of their own monies then it'd be a far different story. Set up something that corrupt UN officials can purloin, and the work begins yesterday.

Darfur is a ongoing tragedy of epic proportion, caused by ill-meaning interventions of the mamby-pamby kind when a big stick was what was needed. The UN isn't doing anything, and neither should we. It is not in our national interest to send American men to die when the rest of the world doesn't care enough to lend a hand.