Overweight teens can sue over their unhappy meals 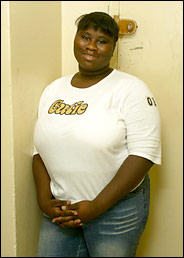 "A federal judge has ruled that the McDonald's-made-me-fat lawsuit - now in its fourth year - can lumber on.

The suit alleges the fast-food giant made two hefty teens fat and sickly with deceptive advertising that made them think its food was nutritionally beneficial and part of a healthy lifestyle if eaten daily.

But in his ruling, Judge Robert Sweet said their suit could continue because they had "sufficiently described" the injuries they suffered - "obesity, hypertension and elevated levels of LDL cholesterol" - and specified which ads were "materially deceptive."

The judge limited their allegations to 40 ads, but said more could be added for "good cause shown."

He gave McDonald's 30 days to answer the complaint."

Jazlyn's father says that he was not aware of the dangers of slopping the hog with Mickey-D's. So instead of wondering why the kid was getting fat, say, at the 180 lb mark, or 200, or 240, he awakens to this fact when she cracks the 270 barrier.

I see. What's next. Suing Africa for making them black and dumb?