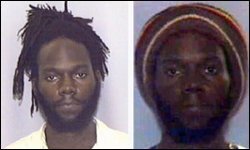 A couple of weeks back, an acquaintance I'd recently met was killed as he opened his front door. He lived alone so the details are sketchy, but it appears that he was heading for work when someone met him on the front porch and shot three 40 caliber rounds into his face. At the time, the clinical side of me remarked that whomever fired those bullets was a decent shot, and I said as much to the police who'd found my name in his address book and gave me a call. Their response was, nah, not really. Anyone can get lucky at bad breath distance. These things are usually caused by an irate husband or old gambling debt, and maybe he even flashed a finger to the wrong guy because nowadays people are so touchy, but the perp or perps would eventually screw up and be caught, so have a nice day now.

They treat such matters a tad differently when it's one of their own. Don't they though.

Deputy Vernon Matthew Williams was killed in a burst of gunfire Thursday as he pursued the suspect, who had fled from a traffic stop, Polk County Sheriff Grady Judd said. The gunman remained on the loose Friday.

"We can literally walk by him, close enough to touch him and not see him" because the woods are so dense, Judd said.

Judd again held up a photo of the suspect at a news conference. He said the man was from Miami and officials were confident he was involved in drug dealing after talking to several of his associates. But they hadn't determined his real name, because he used several aliases.

But the gunman's face was identified by Deputy Douglas Speirs, who made the traffic stop and was shot in the leg moments after Williams was killed. Williams, 39, probably died instantly, Judd said.

"He was shot multiple times. I don't believe he felt a thing," he said."

Funny thing is, the guy in the mugshot looks familiar to me. But he'll eventually screw up and get caught so have a nice day now.