Pope To Barbarians: Stop By And We'll Chat... 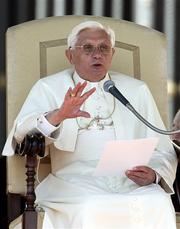 Benedict will meet Monday with ambassadors from predominantly Muslim countries. A Muslim council that advised the Italian government on integration issues also was expected to participate, the ANSA news agency said.

The Vatican has been seeking to defuse anger across the Muslim world that followed the pope's remarks about Islam last week in Germany.

Benedict cited the words of a Byzantine emperor who characterized some of the teachings of the Prophet Muhammad as "evil and inhuman," particularly "his command to spread by the sword the faith."

The pope said Sunday that he was "deeply sorry" about the reactions to his remarks and that they did not reflect his own opinions. Earlier this week, he said his comments were open to misinterpretation and that he had "deep respect" for Islam.

For the umpteenth time: The Pope did NOT say he was sorry. He said he was sorry that moslems went batshit over his remarks. And while it's awfully white-robed of him to send these animals an invite, just think of what it'll cost to de-louse the joint after they're gone.