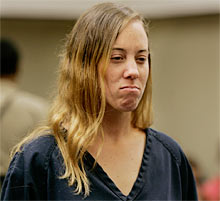 SAN DIEGO (AP) - A judge issued an order Friday barring attorneys from publicly discussing any aspects of the case involving the woman who was with San Diego Chargers linebacker Steve Foley when he was shot by an off-duty police officer.
The gag ruling followed leaks of investigators' tapes, photographs and documents. It prohibits attorneys, investigators and parties in the case from speaking to media representatives, at risk of being held in contempt of court.

"No leaks, no press conferences," San Diego Superior Court Judge Jeffrey Fraser told the lawyers. He said he wanted to prevent the case from becoming a "media circus."

Guylyn Cummins, a lawyer representing The Associated Press and other media organizations, said Fraser's ruling was too broad.

"The law is pretty clear, but often in practice courts go way beyond it, especially in high profile cases, and that's what's happened here," Cummins said.

Gaut has pleaded not guilty to assaulting the officer. Prosecutors say she got behind the wheel of Foley's car and tried to run him down after the Sept. 3 shooting near Foley's home in suburban Poway. She told investigators that she didn't know how to put the car in gear.

She faces up to five years in prison if convicted of all charges.

Prosecutors accused Gaut's attorney, Raymond Vecchio, of releasing the tapes "under circumstances which he must have known, and presumably intended, would reach and potentially influence jurors in the case."

Mansker, a 23-year-old rookie officer with the Coronado Police Department, shot Foley in the leg and thigh after tailing him for about 30 miles on a freeway, suspecting that he was driving drunk.

Mansker can be heard on the tapes telling dispatchers that he followed Foley's plum-colored 1971 Oldsmobile Cutlass Supreme after seeing the car weave through freeway traffic.

The shooting occurred after Foley got out of the car and began walking toward Mansker, who fired a warning shot. Mansker told investigators he shot Foley after the linebacker reached into his pants with his right hand.

According to the tapes, he feared for his life.

Foley, who was unarmed, has not been charged with any crime.

Mansker has been placed on paid administrative leave."

I do believe we told you that Foley wouldn't be charged with much of anything and the focus of the investigation would shift to the off-duty police officer who took it upon himself to employ the use of deadly force and in doing so break half a dozen or more departmental regs.

Lisa Maree Gaut is another story though, as law enforcement tries to find someone to blame other than the young officer. It's his word against two lowlife "civilians"... that California deems to be nothing more than herd animals... andlook for Foley and Gaut to sue the ever loving shit out of the officer and the department, then settle handsomely out of court. Foley has money. Money means lawyers. Lawyers mean the cops don't stand a chance, particularly against two minority members. And in this case they shouldn't. The lad who just wanted to "go home" should have called for backup. Foley and Gaut acted like celebrities who were above the law and took it upon themselves to dismiss the rookie's claim of being a cop, when they should have locked up tight and dialed 911. This does happen quite often to celebrities, people pretending to be one thing or another, and they'll use that asn a defense. The cop is damned lucky that neither of them chose to exercise their 2nd Amendment rights when an unmarked car followed, then tried to run them off the road.