SOUND FORTH THE ALARUM BELLS... 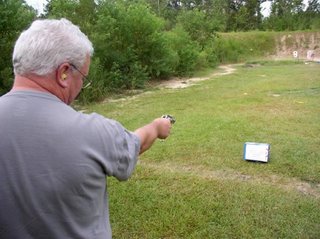 The Box O 'Truth has a new episode featuring stupidity for the exceptionally stupidious. This time, his errorness takes on Snake-Loads. while at the same time offering his rendition of Peter-Pan-Shoots-A-Revolver. (No, you cannot have a gayer shooting stance than this...)

"Some have suggested shooting a bad guy in the face with hopes of blinding him, but this is a bad idea.

You might not have a shot at his face, but even if you did, blinding a bad guy would only open you up to law suits.

If you have time to shoot, make it count. Use a modern, well-designed JHP and shoot for the center of his torso or head, if that is the only shot available.

If you or your family members lives are at stake, this is no time to be playing around with weak and ineffective snake loads.

Use the best available loads. Your life depends on it.