The Breck Girl Wants To Spend Even MORE Of Your Money 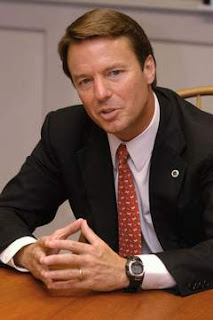 "John Edwards says if he's elected president, he'll institute a New Deal-like suite of programs to fight poverty and stem growing wealth disparity. To do it, he said, he'll ask many Americans to make sacrifices, like paying higher taxes.

Most if not all of the grandiose schemes foisted upon us by the likes of Edwards, and RodHam, and the other lefty socialists, are the precise antithesis of what America is all about. To them you see, rights are things to be bestowed, such as the Europeans do, because once you identify something as being GIVEN, it can then be TAKEN AWAY.

The Founding fathers made it abundantly clear that mankind is blessed with certain Rights at birth, and therein lies the single biggest difference between us and those who would make us loyal and beholding subjects.

The RIGHTS enumerated in the Constitution are the ones the lefty thieves wish to disregard in favor of handouts such as national health care and free college tuition because nothing is more dangerous than an electorate with the power to express their opinions freely, and the capability of defending themselves while doing so. But of course Edwards would wish EVERY child to be indoctrinated in the college of his choice. For SURE Hillary wants you to believe that the simple premise of taking care of yourself and your family is something best left for the government to handle, because this creates a national dole that they've heretofore reserved for the minority classes, and it worked splendidly well for THEM so why not for EVERYONE.

Wealth disparity is due to one thing and one thing only. Some people simply have more to offer society and are so compensated. This makes them anathema to the liberal ideal, and quite dangerous to boot. Success SHOULD come from Uncle Sugar, and not ones personal level of dedication and intelligence.

Making us all into a nation of beggars is the prime directive, make no mistake about it.