The Strange Case Of The Syrian Nuke Facility 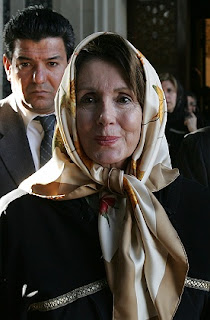 October 22, 2007 -- ON Sept. 6, Israel struck a remote target in eastern Syria. The story didn't really break for weeks, and details are still emerging - but the consensus view is that Israeli aircraft attacked a secret nuclear facility.

There's much more to it than that. The echoes of that strike resound far beyond the Middle East.

Tel Aviv isn't showing any leg when it comes to exactly who did what to whom. Airstrikes may have been synchronized with commando action on the ground. We don't know, and, for now, secrets are being kept.

The circumstantial evidence is strong, though, that the terror-affiliated regime in Damascus had embarked on a nuclear-weapons program - with the help of the North Koreans (who, simultaneously, have been teasing us with suggestions that they'll dismantle their own nuke effort if we pay them lavish tribute).

My own suspicion is that rent-an-expert Pakistanis were involved, too - with or without the blessing of Islamabad's Inter-Services Intelligence agency, an organization with often contradictory and always dubious loyalties.

Caught out and humiliated by the Israeli raid, the Syrians are bulldozing the site to bury the evidence. Straightforward enough, so far. But now consider the factors beyond the obvious Israeli concerns over Speaker Nancy Pelosi's buddy (a k a President Bashar Assad) and his quest for weapons to destroy the Jewish state:

* The Syrian reactor was at a very early stage, but neither Israel nor the United States called Damascus out before the world community. This reflects exasperation with the United Nations' unwillingness to do anything meaningful to stop rogue states from acquiring nukes. Instead of complaining, the Israelis just hit the target.

* Israel also acted because its military (especially its air force) is still smarting from its embarrassment during last year's confrontation with Hezbollah. The IDF needed to renew its image as supremely capable - and the raid sent a no-nonsense message that Israel's back in form.

* The biggest question is how much Washington knew about the attack in advance: Was it a joint plan with plausible denial built in or only a matter of shared intelligence - or did Tel Aviv wait to tip off Washington at the last minute (the minimum requirement)?

* Even excluding the nuke issue, Israel had to get Syria's attention. Since its Hezbollah client "won" last year's war, the Assad regime has continued to assassinate Lebanese politicians, to re-arm Hezbollah (while providing start-up funds to alternative terror groups), to encourage Hamas, and to facilitate the passage of terrorists and weapons into Iraq, further destabilizing the region.

* The attack also put Iran on notice that neither Israel nor the United States means to tolerate nuclear weapons in the hands of rogue regimes in the Middle East. This was, to a great extent, an attack on a proxy target. Whether Iran's leaders are capable of rational analysis is another matter.

* As a number of military analysts have pointed out, if Israeli aircraft were able to operate with impunity deep inside Syria, which fields state-of-the-art, Russian-supplied air defenses, it suggests a startling breakthrough in crippling an enemy's surveillance system and his command-and-control mechanisms.

Other states, such as Iran, that splurged on made-in-Russia air-defense systems must be panicking - while the Kremlin's generals have some explaining to do to Czar Vladimir.

* If the Israelis did, indeed, employ next-level military technology, the obvious question is: Why tip off your enemies that you've got new, paradigm-shifting tools just to blow up a cluster of buildings under construction, when any serious threat remained years - probably a decade - away?

There's a gaping hole in the logic - unless that, too, was a signal to Tehran..."

Five months after Nancy's meeting with Assad, Israel bombed Syria, so it is a given that the Israeli's were already in the process of planning their attack against the madman's nuke plant. So there's Nancy, pledging her undying love and admiration for this killer, and using her status as speaker of the house to issue a worldwide stamp of approval towards Assad, and of course the de facto condemnation of Israel that goes along with it....

...While we most assuredly were exchanging intelligence with Israel for the purpose of a military engagement with these people.

Was she secretly sent to Syria by the Bush administration to soften them up?

Is is clear that the Iranians and Syrians have come to the conclusion that terrorism alone isn't enough, that they desperately need military parity with Israel and the West, and part of the reason for the destruction of Assad's facility was to put ALL nations on alert that it ain't gonna happen.

Trifle with us at your peril, and don't believe for a moment that the Russians have anything to sell you that we can't get past.

And to Nancy...a heartfelt THANK YOU for running interference for the Bush administration while we and the Israel's were planning to bomb the SOB back to the stone age.