Going To The Candidates Debate... 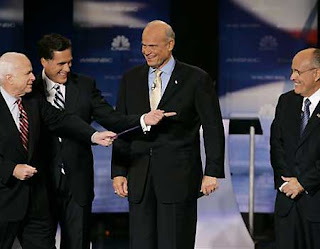 WASHINGTON — The claws were out Sunday night as the GOP presidential candidates went for each other's jugulars trying to prove to Republican base voters that each is the most conservative candidate in the race for the White House.

Saying he was "conservative as soon as I could put down 'Conscience of a Conservative' while in college," Fred Thompson added that he supported conservative judges and earned "a 100 percent pro-life record" while in the U.S. Senate.

"Mayor Giuliani believes in federal funding for abortion. He believes in sanctuary cities. He's for gun control. He supported Mario Cuomo, a liberal Democrat, against a Republican who was running for governor; then opposed the governor's tax cuts when he was there," Thompson said.

Giuliani fought back that he "outperformed any expectations" in dealing with high rates of crime within a large immigrant community. In the meantime, he got a "heck of a lot of conservative results" while mayor of New York City."

"Claws" aside, this is actually a good job of reporting what went on in Orlando. Fred explaining his position on Tort, Rudy trying to explain how decisions made in NYC shouldn't be held against anyone, Romney and McCain taken to task for those dry hump parties with Teddy The Lady Killer, Huckabee the peacemaker, and Ron Paul the court jester.

And when all is said and done, illustrating the difference between Republicans speaking of ISSUES and expressing their loyalty to Conservatism, while the Dems do their level best to HIDE from the stigmata of Liberalism. I'm of a mind to believe that these sort of Conservative soirées strengthen the Republican party while at the same time exposing the dems for the charlatans they truly are.