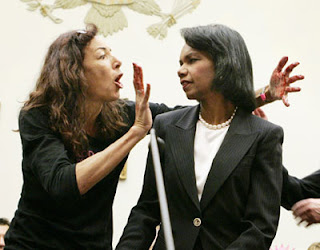 October 24, 2007 -- An anti-war protestor, whose hands were painted red to look like blood, stormed up to Secretary of State Condoleezza Rice as she arrived to testify on Capitol Hill this morning, shouting "war criminal" before being hauled away by bodyguards.

The demonstrator was easily within arms distance when she accosted Rice who remained calm as bodyguards jumped on the intruder.

There was a brief struggle between other members of the anti-war group "Code Pink" who were tossed out of the House Foreign Affairs Committee hearing room by Capitol Police.

"Out!," shouted the chairman of the Foreign Relations committee, Rep. Tom Lantos (D-Cal.) to the protestor who also demanded the removal of several other Code Pink members, a group that often disrupts hearings on Capitol Hill.

Rice was scheduled to talk about a "two-state solution" in the Middle East.

Code Pink. The same idiots that are INVITED into Capitol Hill by democrats who want and expect just this sort of behavior. You just don't waltz into a hearing room without some heavy juice greasing the skids. Try it some time. When in DC take a stab at getting a seat at a Foreign Affairs meeting.

All of these events are staged at the behest and full approval of democrats, so stick it where the sun don't shine, and stop making believe you've an ounce of indignation in that traitorous body, Lantos.