Hussein Continues To Snark Away At RodHam 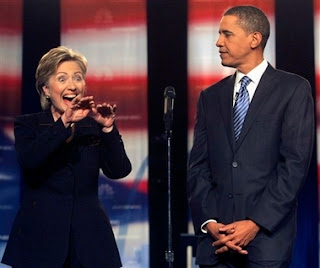 "After the most secretive administration in memory, an administration that consistently misled the American people, we need a president who is going to be open and forthright," Obama said. "I think last night's debate really exposed this fault line. Senator Clinton left us wondering where she stood on every single hard question from Iran to Social Security to drivers' licenses for undocumented workers."

Obama said he was especially concerned by Clinton's response when asked if she would release her papers from her years as first lady.

"Her big answer on whether she would release the papers from her White House years was particularly troubling because she is running on her record as first lady as much as on her record as a senator," he said. "How can people fully judge that record if the documents from those years remain locked away?"

After the obligatory diss at Bush..can't possible attack a Republican candidate for fear they will fight back and then some...the Ill-Annoy'ed Senator continued his recent tirade against the other bush, proving that he can be just as tongue tied as the Oval Orifice-in training, but with better oratory skills.

NOTHING will EVER get Hillary RodHam to open the books on her 2 term co-Presidency. Back then she was the Princess who could do no wrong, acted that way, treated the little people that way,and her subjects dare not see that side of her for fear they'll revolt.