CRY ME A RIVER...Foliage Not As Sparkly... 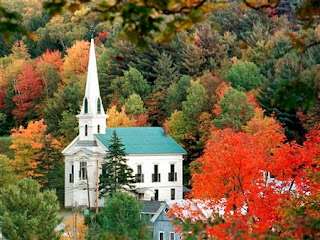 EAST MONTPELIER, Vt. (AP) - Every fall, Marilyn Krom tries to make a trip to Vermont to see its famously beautiful fall foliage. This year, she noticed something different about the autumn leaves.

"They're duller, not as sparkly, if you know what I mean," Krom, 62, a registered nurse from Eastford, Conn., said during a recent visit. "They're less vivid."

Other "leaf peepers" are noticing, too, and some believe climate change could be the reason.

Forested hillsides usually riotous with reds, oranges and yellows have shown their colors only grudgingly in recent years, with many trees going straight from the dull green of late summer to the rust-brown of late fall with barely a stop at a brighter hue.

"It's nothing like it used to be," said University of Vermont plant biologist Tom Vogelmann, a Vermont native.

He says autumn has become too warm to elicit New England's richest colors.

According to the National Weather Service, temperatures in Burlington have run above the 30-year averages in every September and October for the past four years, save for October 2004, when they were 0.2 degrees below average."

So it is a BAD THING for those in the Northeast to NOT have to turn on the heat by late September? It is therefore BETTER to burn fossil fuel and coal to warm up the homestead because they miss the COLD days that made the trees real pretty?