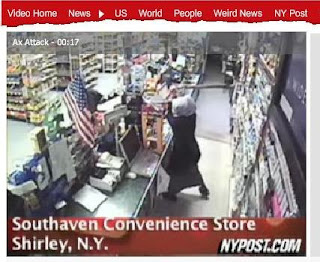 October 24, 2007 -- "A tiny but fearless shop clerk stalled a robber pointing a gun at her head - then swung a giant ax wildly at him until he ran from her family's Long Island convenience store.

Hafize Sahin, 27, all of 4-foot-5 and 90 pounds, was working alone in the store on Montauk Highway in Brookhaven Saturday evening, Suffolk Detective Lt. Edward Reilly said.

When the gunman turned to make sure no one was outside the store, Sahin reached for a 3-foot ax behind the counter and began to swing away.

"I was scared, I was shaking," said Sahin yesterday. "He was going 'Give me the money!' I said 'hold on, wait, I can't find the key.' I took my time, making believe I couldn't open the drawer." I

"When I was trying to hit him, he pointed the gun at me" but did not fire. "I was yelling at him and telling him 'Get out of here!' I didn't want to hit him, I just wanted him to get out."

Reilly described the suspect as male, black, age 28 to 30 with a medium build, wearing a black hoodie and black bandanna partially covering his face."

I know that you're asking yourself how she could be described as fearless after admitting how afraid she was, and this isn't a hit on the brave young lady but the average run of the mill pitiful writing that passes for journalism.

Feisty would have better described her, as there isn't a one of us truly fearless. Chuck Yeager aside, but of course.

Nice ax work, kiddo. Shame you live in a city where the criminal is afforded more protection than the store owner, but ya done good.