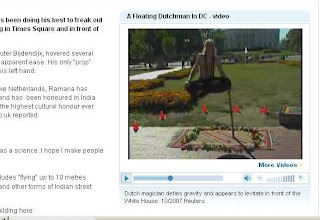 "Dutch magician Ramana has been doing his best to freak out America by levitating in Times Square and in front of the White House.

The illusionist, real name Wouter Bijdendijk, hovered several feet above the pavement with apparent ease. His only "prop" was a stick that he held with his left hand.

Click here to see video of Bijdendijk at News.com.au.

A household name in his native Netherlands, Ramana has performed for Queen Beatrix and has been honored in India with the Golden Cloth award, the highest cultural honor ever given to a westerner, Metro.co.uk reported.

"And in India, they see it also as a science. I hope I make people wonder," Ramana said.

Ramana's repertoire also includes "flying" up to 10 meters above ground, mind reading and other forms of street trickery," but continues to deny the persistent rumor that he in fact was hired by former President William Jefferson Clinton to make a certain spouse vanish into thin air.

"Some things were lost in translation" Ramana said with regards to his first trip to the White House in 1998. "I was under the impression that President Bill wanted me to make a female dog disappear from the White House and re-appear deep within a famous building, never to be seen again. Apparently that wasn't exactly what he asking for, but I didn't do the English well back then so I can't say for sure what he really meant by 'bury the bitch for me in Grant's Tomb...'"