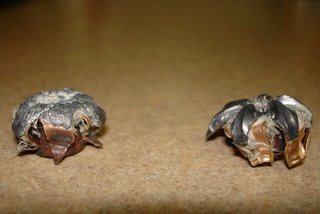 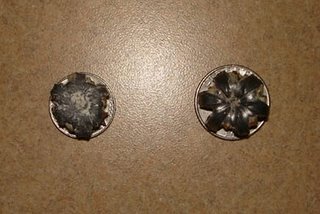 Ranger-T on the left. Bullets were fired from a Glock 23 .40 S&W through 10% ballistic galatin, and both weighed 180 grains. The Ranger-T was hardly chopped liver for as you can see it covers a nickle. The Federal HST was filet mignon in that IT nearly covers a quarter.

Surprisingly, penetration was nearly identical, with both rounds stopping at approximately 13.5 inches. I'd have thought the Ranger would penetrate deeper due to less expansion, but the greater velocity of the HST...1030 fps versus 995 for the Ranger seems to have made them equally deep hole-punchers.

Either will do very well thank you, even for the "handguns are feeble and weak" crowd, but I'm sticking to Federal HST for now.

And waiting to see if Winchester ups the ante.

Ranger SXT stands for Same EXact Thing, as it is the improved version of their Black Talon that received so very much bad liberal press.

Federal HST stands for Hi Shok Two, and NOT Hydra-Shok Two as some blithering idiots who cannot tell the difference between a Hi Shok and a Hydra-Shok continue to call them. Or Hydro-Shock as the fat blithering idiot at Box O' Truth would say. You know, the obese old shooter who wades through ankle-deep piles of tarnished, spent brass to assume his shooting position, and hasn't a clue that such sloppyness bespeaks so poor an attention to detail as to render offerings and opinions utterly worthless. The same disgusting charlaton who updates once a month and can't even bother will a spellcheck. You know, that guy.
Posted by Fits at 9/10/2006 12:04:00 AM

Wow. Took you 4 years to spit it out?

I do understand though. Insane Asylums can be a bitch about getting an outside line.