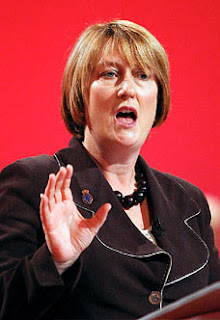 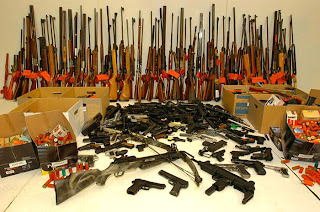 Nearly 120 people were arrested and 1,300 guns and imitation firearms seized in a major police crackdown, it was announced today.

Raids in hotspots which account for more than half of Britain's gun crime - Manchester, London, Liverpool and Birmingham - involved more than 1,000 officers yesterday.

The operation was part of an anti-gang action plan set up by Home Secretary Jacqui Smith in September, shortly after schoolboy Rhys Jones was shot and killed near his Liverpool home.

Ms Smith said: "Getting guns off our streets is a top priority for the Government and the day of action sends a strong message to criminals and the community that weapons won't be tolerated. Even if all we found were mostly toys, the mere sight of a toy could cause grievous harm to an unsuspecting person who doesn't know the difference between imitation and realistic imitation and real."

Pictured #1: Jacqui Smith, who was "pretty impressed" with the haul of mostly toys.