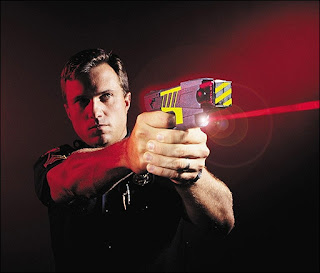 "A third death in five weeks linked to the use of Taser stun guns by police in Canada on Thursday prompted a ministerial inquiry in easternmost Nova Scotia province.

Justice Minister Cecil Clarke ordered the review into the use of Tasers in Nova Scotia, he said, following the death of a 45-year-old man who died in police custody Wednesday, hours after being zapped.

"I have ordered Police Services officials in my department to immediately begin a review of policies and procedures regarding Taser use in Nova Scotia" by law enforcement, corrections staff and sheriffs, Clarke said in a statement.

"At the same time, RCMP are being called in to investigate the circumstances of the death at the correctional facility and I understand Halifax Regional Police will also have the RCMP conduct an external investigation into the arrest."

In October, Robert Dziekanski, 40, died after being shocked repeatedly by policemen with a Taser stun gun only 60 seconds after they first approached him at the Vancouver airport in westernmost Canada.

A bystander's video released last week showed the four officers then piled on top of the distraught traveler as he lay writhing and screaming in pain on the floor, and within minutes he fell still.

Days later, a Montreal man died in hospital after being shocked by police with a stun gun, touted as a safer alternative to firearms.

In the wake of these fatalities, Amnesty International urged authorities to suspend the use of Tasers, saying it had documented 16 prior deaths in Canada that raise "serious questions about the health risks involved in electro-shock weapons."

The Royal Newfoundland Constabulary heeded the call, suspending the use of Tasers in the Atlantic island province.

Public Safety Minister Stockwell Day said he ordered a review of the use of Tasers in Canada and asked Canada Border Services Agency (CBSA) to explain how Dziekanski, who spoke only Polish, got through customs, and why he was left alone in a secure area for nearly 10 hours.

The CBSA is expected to make its report public by week's end.

Dziekanski had traveled to British Columbia to live with his mother and start a new life, but a mix-up at the airport forced him to wait for her for almost 10 hours in a secure area, while she waited for him on the other side of a wall in the public arrivals area.

According to the family's lawyer, Dziekanski spoke only Polish, and had never before traveled far from his home town of Pieszyce, Poland.

Police were called to the Vancouver airport after Dziekanski blocked a security door with chairs and a table, and threw a computer off a counter onto the floor."

The vast majority of the people who've died from a tasering WERE disturbed individuals who left the police little choice but to use some force in controlling them. And therein lies the rub.

What precisely IS sufficient force.

Tasers exist so that police may temporarily stun someone, then cuff them. We are all aware of the devices used before the advent of tasers. Batons and impact gloves were pretty much the tools of the trade, and throughout the years many an individual was pummeled to death in the process. Have the police gotten far too taser-happy? Probably. Do they buy into the mistaken belief that one shot will turn a full grown man into mush then continue to taser then taser some more when the person continues to put up a fight. Certainly.

As a somewhat sane individual I know full well that resisting arrest is going to leave a mark, might even be fatal, and would enter into such a confrontation with knowledge aforethought. I don't go down all that easily, might even be shot, but I've made the choice and can understand the problems that families have when their mentally challenged love ones are killed by police, because theres a good chance the deceased didn't realize what was coming.

Welcome to Life Sucks Then You Die. If someone is competent enough to travel about without a keeper then law enforcements presumption must be that they are dealing with a rational individual. Not all cops are thieves, and killers, and flat out crooked, and brutal beasts, far from it. Keeping the peace is what they do for a living, and Mr. Dziekanski was breaking the peace with a vengeance. It'd be nice if all such folks carried a sign around their necks proclaiming a disability with a phone number to call in case of emergency, and the cops could take the time to await the arrival of a pacifier.

Not in the real world. Sufficient force is just that. The amount of force necessary to render a person incapable of fighting back. Varying from one person to another. And therein lies rub #2. A non-lethal weapon capable of instantaneously taking down a 270 pound man is most certainly going to be somewhat lethal to his 150 pound counterpart. This we have seen to be true. Not everyone is healthy enough to withstand a repeated tasering, and sure, its a given that some cops are going to be cruel and unusual, but I've had it to here with weeping about the bad guy and his ouchies.