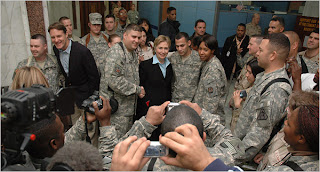 "As violence declines in Baghdad, the leading Democratic presidential candidates are undertaking a new and challenging balancing act on Iraq: acknowledging that success, trying to shift the focus to the lack of political progress there, and highlighting more domestic concerns like health care and the economy."

Translation: With cut & run no longer even a remote option with most of the electorate, the surrender-clan known as the democrat party is forced to fall back to the old, tried and true ploy of giving away as much of our money as possible to as many lowlives as can be squeezed in line to feed at the public trough.

Pictured: Hillary Rodham wearing her best sleazy-nightclub-singer/unisex outfit as she poses with troopers.
Posted by Fits at 11/25/2007 08:07:00 PM