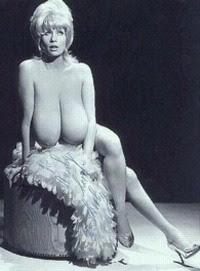 STOCKHOLM, Sweden — "A group of Swedish women is making waves by taking their tops off at public swimming pools in a protest against what they call gender-biased rules on swim wear.

About 40 women have joined the network and staged topless protests in at least three cities, said Sanna Ferm, 22, one of the founders of the group called Bara Brost, or Bare Breasts.

"The purpose of the campaign is to start a debate about why women's bodies are sexualized," Ferm said Wednesday.

She said the fact that men can be bare-chested in public swimming pools but not women is "a concrete example of how women have fewer rights than men."

Reactions from other swimmers have ranged from support and encouragement to anger and even indifference, she said.

The network was formed after two women who were swimming topless in a public swimming pool in Uppsala, north of Stockholm, were asked to cover up or leave.

Women can sunbathe topless in the summertime at beaches around Sweden, which is known for its relaxed attitude toward nudity, but they are required to wear tops at public swimming pools.

The women have filed a complaint against the facility to Sweden's Equal Opportunities Ombudsman."

I hope you all join with me in standing beside our Swedish sisters as they fight this blatantly sexist law. And I call on all women of good will to spread the word that what's topless for one should be topless for another.

Rosie O'Donnell excluded of course. I mean, I try to be fair but I'm not a blind man.

Okay, the Swedish Institute For Equality was gracious enough to provide me with a picture.