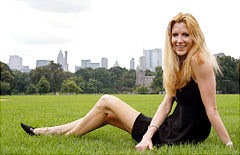 "She called 9/11 widows "witches," but rabid right-wing pundit Ann Coulter doesn't like people heckling her with nasty notes or hurling insults outside her house.

The sassy blond Republican booster has successfully petitioned Florida officials to remove her name and address from county property records so critics can't find her.

The conservative darling took steps to shield her whereabouts after someone hand-delivered a threatening note to her Palm Beach home in March.

The 45-year-old best-selling author took the note to the cops demanding an investigation."

The NY Daily Snooze would be rallying around one of its pet loons were they to have done something similar, but anything to take a jab at Ann, ya know.

When someone threatens a liberal they're described as stalkers, but with Ann they're merely "critics".

Can't make this shit up.

PS: Those witches WERE witches, and I can't wait for Ann's rebuttal, but in the meantime check this out:

But Jonathan Karp, head of the Twelve imprint at Hachette Book Group USA, isn't worried. Karp told Page Six yesterday, "When we met with Sen. Kennedy, he assured us he would be candid."

Kennedy, who didn't report the Martha's Vineyard crash to police for many hours, eventually pleaded guilty to leaving the scene of an accident and was given a two-month suspended jail sentence.

Asked if Kennedy would come clean on the scandal, conservative author Ann Coulter quipped: "He'll cross that bridge when he comes to it . . . If he does talk about Chappaquiddick, I believe he'll have to forfeit his advance under the Son of Sam laws."