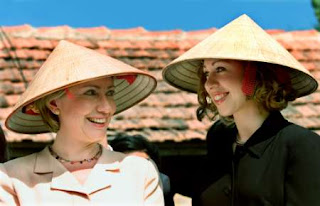 Clinton's statement came a day after China railed against her warning Tuesday of a dangerous tide of Chinese-made gifts, saying that "any slander or exaggeration of facts is irresponsible."

"This is the same government that just this month revoked the licenses of more than 750 of its toy companies because of quality control problems and ordered another 690 to renovate or improve their facilities, even as it asserted that 99 percent of toy exports met quality standards," Clinton said in her statement.

"And the Chinese government's watchdog agency reported earlier this year that 20 percent of the toys made and sold in China pose safety risks. That is unacceptable."

Clinton also took up China's claim that the majority of problems with Chinese toy exports were due to "design faults by (foreign) importers and designers."

The New York Senator said US companies "have to do a better job at every stage of the process ... to make sure that the toys they are bringing into this country -- and profiting from -- do not pose risks to children."

"As the holiday shopping season begins," Clinton said, "our government should be taking immediate, decisive steps to ensure that the toys we are importing from China and other countries are safe."

China is the world's top toy exporter, selling 22 billion toys overseas last year, or 60 percent of the globe's total, and ever since receiving help from the Clinton family during Mr. Clinton's presidency, has been making unheard of gains in aerospace technologies as well.

"It ok that Mrs. Hillary she say China make bad toy. She promise us many things that why penniless Chinese workers make believe they ones donating millions of dollars to her campaigns when it really government money. We make up what losing now in future when she become big boss and sell us even more modern spy and weapon systems," an unidentified representative of the Chinese government related to Newsmax under conditions of full anonymity.