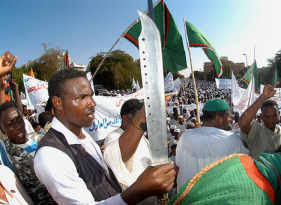 "TERRIFIED teddy bear row teacher Gillian Gibbons was being held in a secret jail last night — after a 10,000-strong armed mob took to Sudan’s streets screaming: “Kill her, kill her.”

The Liverpool mum of two — convicted of insulting Islam by calling the bear Mohammed — was sneaked out of the capital Khartoum hours after being jailed for 15 days.

Fanatics demanding her execution by firing squad streamed out of mosques after prayers — grabbing machetes, knives and clubs. The hate-filled protesters — whipped into a frenzy by religious leaders — converged on the presidential palace as it emerged Gillian was an INNOCENT victim of a vindictive school secretary.

Pictures of Gillian, 54, were burned as hardline clerics in pick-up trucks chanted through loudhailers: “No one lives who insults the prophet.”

So precisely what did she think would happen in such a country?

She broke the law. One of THE most sacred law of laws. In no way, shape, or form does one disrespect the prophet. Cannot show the prophet's face, cannot say the prophet's name except in all reverence.

Are nations allowed to have their own laws? Should those visiting such nations be expected to follow and prepare to face the full consequences and penalties for breaking said laws?

We like referring to our country as a nation of laws. The Conservatives among us demand that those who commit a crime be punished to the fullest extent of the law. Those who don't like it can find another country to visit.

This is why NO person of good will should EVER work in a moslem nation. Such a person cannot abide by moslem law, cannot in any way agree with moslem law, and oft times is ignorant of moslem law, such as this unfortunate teacher.

The international community has stood behind islam and its laws. Great pains are taken to accommodate islamic culture the world over. You do not hear tell of womens groups protesting the treatment of Gillian Gibbons. None of her sisters has given voice to this tragedy and confronted those howling mobs, so must conclude they agree that she has committed a heinous crime and deserves whatever punishment the people demand.

Not I. I believe a company of Marines should strike Khartoum and strike it hard. Free Ms Gibbons immediately and devil take anyone standing in their way.

Guess that makes ME the better feminist.