PHILLY IS ONE SUPREME AWAY FROM BECOMING THE OK CORRAL 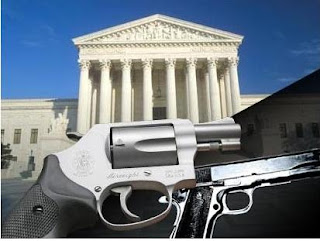 "We may only be the 21st most dangerous city in America today, but Philly and big cities like it could get even more dangerous in the near-future if the Bush-Reagan court strikes down the few gun laws that we actually have on the books:

WASHINGTON, Nov. 20 — The Supreme Court announced today that it would l decide whether the Constitution grants individuals the right to keep guns in their homes for private use, plunging the justices headlong into a divisive and long-running debate over how to interpret the Second Amendment’s guarantee of the “right of the people to keep and bear arms.”

The court accepted a case on the District of Columbia’s 31-year-old prohibition on the ownership of handguns. In adding the case to its calendar, for argument in March with a decision likely in June, the court not only raised the temperature of its current term but inevitably injected the issue of gun control into the presidential campaign.

The federal appeals court here, breaking with the great majority of federal courts to have examined the issue over the decades, ruled last March that the Second Amendment right was an individual one, not tied to service in a militia, and that the District of Columbia’s categorical ban on handguns was therefore unconstitutional.

Well, you gotta figure that Scalia, Thomas, Roberts and Alito are champing at the bit on this one, so they only need one more Supreme. Justice Anthony Kennedy, our nation turns its lonely eyes to you.

The "few" gun laws that are actually on the books? Somehow I fail to see how "THOUSANDS" can be considered a few, but thats just me.

And how many times must we tell idiots such as this that CRIMINALS DO NOT PAY THE LEAST BIT OF ATTENTION TO LAWS? And that this is all the MORE reason we NEED to be capable of defending ourselves.

Using ANYTHING to harm an innocent person is illegal. Using that reasonable premise as a given, blaming the weapon instead of the wielder is just another liberal way to KEEP us frightened and beholding to big government.

Thanks to Humbug for the link.