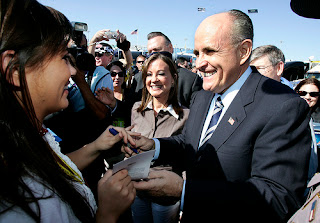 Bad news is Julie Annie trounces her without a doubt

"Republican Rudy Giuliani, shown here campaigning yesterday at the NASCAR Nextel Cup Ford 400 race in Homestead, is the most popular presidential candidate in Florida, with 57 percent of voters willing to consider voting for him, according to a new Mason-Dixon poll.

In a potential matchup with Democratic frontrunner Hillary Clinton, Giuliani wins 50-43 percent. Republicans Fred Thompson and Mitt Romney also beat her, although their wins are within the margin of error of plus or minus four percentage points.

57 percent sounds about right. Even more so considering he's yet to beat her to a bloody pulp in a debate or two. Julie and Freddy and Mitty probably all beat her fairly soundly once they've had a chance to focus on her and her alone,for as we've seen, the woman cannot debate unless the fix is in.