And Sports Will Bring Them Closer Together... 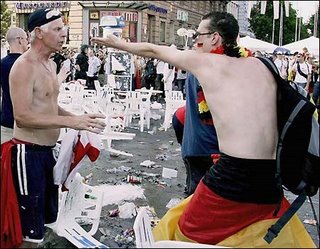 Funny how all of Eurabia has surrendered to the invading moslem hoard, but let them go at a soccer match and Katie bar the door. Good to know they have their priorities straight.

STUTTGART, Germany — Police broke up two brief but violent disturbances involving English soccer fans Saturday, arresting more than 300 people the day before England plays Ecuador in a World Cup second-round match.
Following Germany's 2-0 afternoon win over Sweden, English and German fans clashed in a plaza near outdoor viewing screens in this southern German city. German fans were singing in celebration when England fans began throwing plastic chairs and bottles at them, police spokeswoman Christiane Honer said.
Five Germans were injured before officers in riot gear separated the two sides. Police two or three deep corralled the English fans and waded into the crowd, arresting them one by one. In all, 200 people were arrested, most of them English, police spokesman Stefan Keilbach said.
Posted by Fits at 6/24/2006 10:55:00 PM