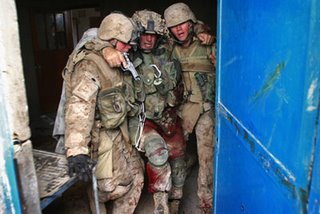 "Brad Kasal has been a Marine since he was eighteen. The story behind the famous photo taken by Lucian Read at the height of the battle for Falluja in November, 2004 has been told often and well in other forums, for the present purpose it suffices that in addition to injuries from using his body to shield another Marine from a grenade blast, he also got shot seven times. Despite bleeding from dozens of holes in his body, Brad Kasal never stopped fighting. For many, Lucian Read’s photo of Brad Kasal – pistol at the ready even as he was being helped from the building, but still with presence of mind to keep his finger off the trigger despite that he had nearly bled to death – is emblematic of the heart and fighting spirit of every United States Marine.

And so when I heard that Brad Kasal’s photo was being used in the 12 June 2006 issue of TIME magazine, with a cover title HADITHA, where the article seemed to intimate that Brad Kasal had been involved in the fighting in Haditha, I stopped working and drove 1 ½ hours round-trip to get a copy of that magazine."

BATTLE SCARRED - In November 2004 Kilo Company fought in Falluja, where First Sergeant Brad Kasal, center, suffered injuries from a grenade blast. [Not to mention being shot seven times that day.]

"The wording of the caption gives TIME some wiggle room, because it is accurate, but it’s not true in terms of the context which indicates that Brad Kasal was in Haditha during the time of the controversial fighting there. He was not.

So, I called Sergeant Major Kasal, still on active duty and recovering from wounds, and asked him about this. He was professional, but he was also disappointed with TIME. He didn’t say anything bad about the journalists, but his disappointment was apparent."
___________________________________
The truth has NEVER stopped the MSM from using our servicemen as pawns to sell their advertisers products'. Please read the entire story, and remember these cretins the next time they're asking for your money, because that's really the only true way to fight such calumny.