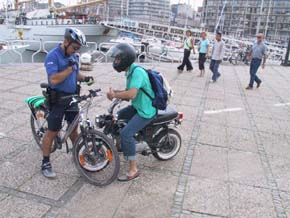 Lem is featuring an interesting story that illustrates just how pervasive the moslem scourge has become.

"Guido Demoor, a 54-year old Flemish train conductor on his way to work, was kicked to death by six "youths" on a crowded bus near Antwerp's Central Station.

There were some forty people on the bus. Demoor asked the “youths” to calm down, whereupon they turned on him, savagely beating and kicking the man.

Three Moroccans, two of whom are minors, were arrested today. The website of the Dutch paper De Stentor reports tonight that a fourth suspect, believed to be the ringleader, fled into a shop as the police were poised to arrest him. He managed to escape from the shop when dozens of “youths” came to his rescue."
__________________________________
Someone tell me how even dozens of kids can interfere with armed policemen? Wait a sec, ARE they armed? And if they are, would they hesitate to shoot?

Let's put this another way; would they shoot moslems? It appears that the officer in the picture (found here ) is carrying a firearm, but so far I haven't been able to locate anything about their rules of engagement, and it's entirely possible that such rules are not for public consumption. It isn't a cops fault if he's not allowed to protect himself or the people he is sworn to serve, and I doubt these officers are anywhere near as corrupt and/or incompetent as those in New Orleans, but if rampaging moslems are premitted to kill someone then flee with impunity because a group of children inrevened, then something is rotten in the state of Belgae.

Keep this in mind when planning your next European Vacation. And check out this from the official Belgian law enforcement website:

"Th(e) philosophy is based on the global and integrated approach of the security problem. It is based on a maximal visibility of the police and forwarded police activities on a limited territory, which allows improving the contact between civilians and policemen. In this case we are speaking about community policing or community orientated policing."