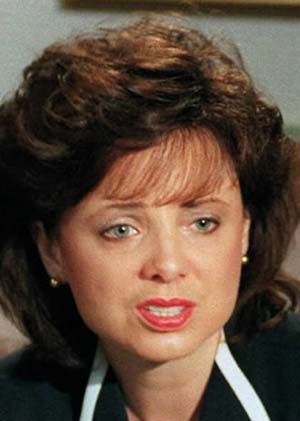 Mystifying murder case. Someone, some absolute bonafide sicko, was enthralled by her little daughters beauty and killed her in a most heinous manner. I did pray that some good would come of Jon Benet's passing, that wealthy Mom's wishing to relive their glory days would think twice before tarting up their daughters and parading them about in a society that encourages different lifestyles. To harm a child is the worst offense, and they'll never find the creature that did this crime, because the parents muddled the investigation and the police were buffoons straight from a bad episode of Law & Order. Not that I believe the Ramseys had anything to do with JonBenet's death, but Patsy didn't grieve in public as much as a distraught mother should have, and I think that even the police found her relative calm to be strangely out of place.

June 25, 2006 -- "Patsy Ramsey, thrust into the national spotlight by the unsolved 1996 murder of her 6-year-old beauty-pageant daughter, JonBenet, died yesterday. She was 49.

Ramsey, first diagnosed with ovarian cancer in 1993 and suffered a recurrence years later, died at her dad's Roswell, Ga., home with her husband, John, at her bedside.

She is to be buried beside JonBenet in St. James Cemetery in Marietta, Ga.

JonBenet was found beaten and strangled in the family's home in Boulder, Colo., the day after Christmas in 1996. Patsy claimed to have found a ransom note demanding $118,000. John told investigators he found the body eight hours later.

Cops said the parents were under "an umbrella of suspicion," but the couple insisted they had nothing to do with the crime and said it must have been caused by an intruder.

In 2003, an Atlanta judge ruled that the evidence did indeed point to an intruder. No arrest has ever been made.

JonBenet followed her mom into beauty pageants, learning how to walk, gesture and perform and collecting a wardrobe of elaborate costumes, including those of a Las Vegas showgirl and a cowgirl."
Posted by Fits at 6/25/2006 09:08:00 AM