Gaps And Coins And Meeting The Twain 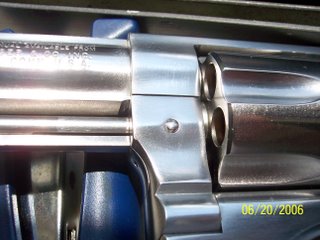 Here's one of the reasons Crazy Jay is having problems testing some of the new .357 magnum rounds. "Our" 3" GP-100 has such a small cylinder gap that the chronograph results from his Taurus aren't jibbing with some of our old tests with the GP. His 4" revolver is cranking out lower velocities than the Ruger, and unless he can find a similar gun I might have to UPS him the bloody thing. Anyway, since it was fun with coins time earlier, let's try it again.

An old law enforcement friend once found a dime stuck in the cylinder gap of his snubby S&W. At the worst possible time. It was his off-duty gun and he tossed it into his pocket as usual, so the worse that could have happened, did happen. He came out of it okay, and learned a good lesson. Any gap large enough to get a dime stuck in it is too fricking big.

A dime is 1 mm in thickness, or approximately .04", and the gap on my GP is a lot less than that (I can't find my gauge right now) so no coin in the world is getting in there. Not that pocket-carry is the best way to travel, but it's another gab fest for another day. Don't know if I'd trust a Taurus with so small a gap...some manufacturers purposefully employ a wide gap to vent off the charge...and I do know that some of their revolvers are .06" or so, and one would expect that there's a reason for it, so getting a smith to tighten things up might be a bad idea.
Posted by Fits at 6/20/2006 03:43:00 PM