Messengers Guide To The World Cup... 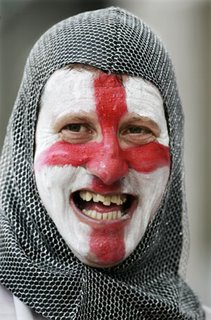 STUTTGART, Germany - About 50,000 England fans are expected to travel to Stuttgart for the team's second-round match against Ecuador tomorrow and will be greeted with a heavy police presence.

Stuttgart police chief Siegfried Stumpf said 1,800 of his officers would be on patrol, along with a contingent of British police.

"For us, the game is not something out of the ordinary," Stumpf said. "But if the situation requires it, we'll have a visible uniformed presence."

Free Hint To German Police: Psst...dress your cops thusly. Yeah, even costume shops don't have the dentition to rival a Brits, so you'll have to capture one and create your own mold but then you're ready for future games.