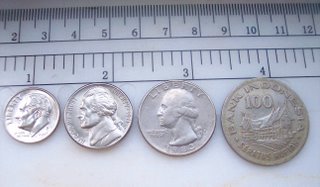 No, I'm not a numis, pnumiz, a coin collector, and we've used the relative sizes of common pocket change to make a point.

Now, all modern, and I stress modern, hollowpoint ammunition available today will penetrate the FBI minimum of 12" in 10% ballistic gelatin. Why they selected 12" is another discussion, but they did and every ammo maker uses this as the baseline.

What every manufacturer doesn't do is fiddle too much with expansion. Now, the round must expand somewhat or what's the point of using a hollowpoint, but to sell ammunition to law enforcement...who by the way use far less ammo than civilians...the all-important BARRIER PENETRATION bugaboo must be addressed, so LE rounds aren't necessarily all that phat, but they are necessarily capable of punching through auto glass, etc. Something we run of the mill guys on the street don't care all that much about, but what a great many of the sheeple DO care about is what are the cops using because that's what I want.

After certain debacles that occurred in 1994 and 1995, the NYPD went a'running to Speer and Federal and Winchester and Remington, asking them for bullets with LESS penetration and more expansion. Seems that the lesser-expanding rounds were flying straight THROUGH targets at an alarming rate, and over 80 innocent bystanders or fellow officers were struck by bullets that over-penetrated.

One of the things you can do to solve over-penetration is to design a projectile with a built-in parachute effect that will slow it down once inside the meat of the matter, and that's precisely what the big name ammunition dudes did.

But not tooooooo much, now. There's still all of that glass and car doors and heavy leather coats, so how's about making a bullet that zips through all of them there but still opens wide for chunky? The ammo dudes said, well okay, but we're talking tungsten variants and steel inserts, and since you always want 100% human hands-on inspections of each and every cartridge we make, you're looking at some big bucks here.

The debate went on, then a funny thing happened on the way to the forum. The press got wind of what Winchester was calling it's super-dee-duper expanding man killer that they'd been tinkering with, and all hells broke loose in media-land.

BLACK TALONS! rang the hue and cry of weepy reporters the land over, and weepy civilians joined in the choir of how-DARE-you-harm-our-underprivleged criminals! And what if the criminals themselves, bless their poor souls, got their hands on these dinosaur-killers?

Would society as we know it long survive?

Law enforcement and ammunition manufacturers said...no...and it was back to the drawing board with a lesson learned. Winchester changed the name to Rangers, Remington called their new bullets Golden Sabers, Speer went with Gold Dots, but Federal stuck with Hydra-Shok because the press thought they were named after something Jason killed on his way to the Golden Fleece and how bad could that be?

But the problem, the technological problem regarding expansion versus penetration didn't go away, and then....

February 4, 1999. Amadou Diallo. On a dimly lit stoop in the Bronx, he reached into his pocket when surrounding officers had ordered him to freeze, and the rest is history. Four officers fired forty-one shots, and nineteen of them landed. Everyone who knows guns knows that police are taught to shoot until the threat is ended, sometimes that means slide-lock, and the twerpy little Gold Dots they were pumping into him were doing the in-and-out dance, so he didn't drop until the last rounds were hitting him and the press once again had their field-day.

Enter the Flying Ashtray. Well, variants of wide-mouthed bullets had been around for quite a while, but the need for a bullet that opened wide was strong indeed, and penetration took a back seat to incapacitation, and the legends began to a'born.

Look at the accompanying picture, and decide for yourself what sized whole you'd like to make in the defense of your life. Good 9 mm's will do the dime to penny trick, and good .40's-.45's will quarter to rupiah every time you feel the need to squeeze.
Posted by Fits at 6/20/2006 02:46:00 PM