Madeleine Not--All-That- Bright Has A New Work Of Fiction Out... 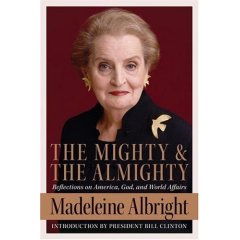 "Iraq is a long way from [here], but what happens there matters a great deal here. For the risks that the leaders of a rogue state will use nuclear, chemical or biological weapons against us or our allies is the greatest security threat we face."
--Madeleine Albright, Feb 18, 1998

"Hussein has ... chosen to spend his money on building weapons of mass destruction and palaces for his cronies."
-- Madeleine Albright, Nov. 10, 1999

The above quotes from Madeleine the bouncing Czech, WON'T be found in her new book, "The Mighty And The All Mighty", because she is a Loon of the first magnitude and as other members of failed Presidency's have done...all the way to Jimmah Cahtah...she is spending an awful lot of time explaining why everything bad that happened on her watch wasn't her, or the President's fault, and how much of a mess the Bush administration has made of things.

No longer content with allowing history to judge an administration on it's merits, the current weepy-willows have decided to reinvent the past to their own liking, and if ever there was a less suitable individual to run the State Department...well... that person has not even been born yet.

If you'd like to tune into her fortune-cookie words of wisdom, then please click here. If you do not, then here is a snippet from her publisher:

"In this illuminating account, Albright argues that, to be effective, U.S. policy-makers must understand the power and place of religion in motivating others and in coloring how American actions are perceived. Defying the conventional wisdom, she suggests not only that religion and politics are inseparable, but that their partnership, when properly harnessed, can be a force for justice and peace."

That's defying conventional wisdom? Sort of like, um, maybe what everyone from the Founders on up have been saying for over 200 years now? Then there's this babble of epic distortion:

"In The Mighty and the Almighty, Madeleine Albright examines the profound impact of religion on America’s view of itself, the effect on U.S. policy of the rise of the Christian right, the Bush administration’s successes and failures in responding to 9/11, the challenges posed by the war in Iraq, and the importance of understanding Islam. She offers a balanced but, when necessary, devastating analysis of U.S. strategy and condemns those of all faiths who exploit religious fervor to create divisions or enhance their own power."