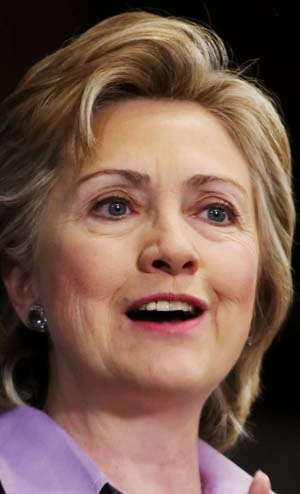 ...And her very existance remains an incomprehensible insult to all people of good will the universe-over...

WASHINGTON - "Republicans are a "disgrace" for playing politics with the war in Iraq, Sen. Hillary Rodham Clinton charged yesterday as she moved to turn the spotlight away from Democratic infighting over when to withdraw U.S. troops.

"They choose to tar all who disagree with an open-ended, unconditional commitment as unpatriotic, as waving the white flag of surrender. They may not have a war strategy, but they do have an election strategy," Clinton charged on the Senate floor.

"The politically motivated resolutions put forth by leading Republicans to gain tactical partisan advantage are a disgrace," she fumed.

"My friends on the other side of the aisle believe that the status quo is working in Iraq. They do not believe we need a fundamental change in policy. They choose to continue blindly following the president."

Then There's The REAL Story...

"But it's the Democrats who sparked a new round of politically charged Iraq debates with a pair of dueling troop-pullout plans that has split the party and pitted Clinton against likely 2008 Democratic White House Senate rivals John Kerry of Massachusetts and Russ Feingold of Wisconsin.