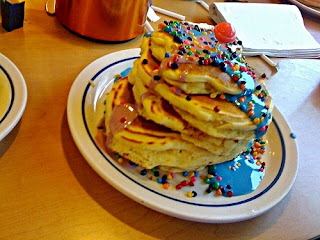 As a press release by Ector noted, “The boycott was initiated by a local Michigan CCW Class Instructor, Rick Ector, in response to that eatery’s ban on the possession of all legally carried firearms—openly carried or lawfully concealed carried with a state of Michigan permit.
In Michigan, open carry of a pistol in a visible holster is legal without a license. Furthermore, the concealed carry of a handgun is also legal if the person has a Michigan Concealed Pistol License.”
“Ector, a former robbery victim, believes that the restaurant’s ban on handguns creates a dangerous dining environment for customers.
The reasoning, according to Ector, is that if a business bans guns then armed criminals will know where they can find unarmed people to rob, rape, and assault. The boycott will remain in effect until this local IHOP location drops it (sic) gun ban.”
Doing the correct thing using incorrect reasoning.  Look it up and you'll see Michigan as the poster child. No one can predict when an armed criminal will need to be gunned down by an armed citizen, and people do not have the right to bear arms because they would be otherwise reluctant to dine away from their munitions.
People are born with the unalienable right to keep and bear arms. This even Michiganders can look up. To tie a RIGHT to a breakfast, at one of the worst restaurants in the galaxy, is ludicrous. The right is a legally just claim, inside of, or away from, any International House Of Pancakes.
The sooner the country is educated away from the ignorance of theatrical presentations abetted by a friendly liberal media, the better. I carry a gun wherever I go for the same reason I keep a spare tire in the trunk. But spare tires aren't including in the Constitution, so when the auto industry was MANDATED to reduce vehicle weight they were forced to remove fullsize spares in favor of those ridiculous doughnuts.
The point being, whenever you let the government decide how you should conduct your daily affairs, the government will find a way to fuck it up. The government could then mandate metal detectors for ALL restaurants to assure that NO ONE enters carrying a weapon, thus rendering moot the talking points of our Michigander friend. So be careful when you stray from the simple fact that you're doing nothing more than exercising a right.
Only pilots and members of law enforcement are allowed to be armed when boarding a commercial aircraft. The rest of us don't matter because they removed the right and replaced it with full cavity searches. Start dreaming of excuses to bear arms and the day will come when you'll hear the snap of a glove while ordering your atrocious, only-fit-for-a-feed-hog breakfast at the International House Of Soon-To-Be-Sheared Sheep.
Posted by Fits at 11/19/2010 09:42:00 AM