Obama's Moslem Brotherhood Burns Him In Effigy...This And Other Pleasantries As Boy Barry Visits India

Traveling With The Caliphate 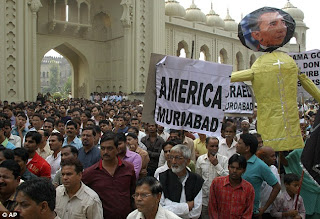 Unwelcome: Some Indian Shiite Muslims are unhappy about Mr Obama's trip and held an effigy of him before setting it on fire as they gather for a protest after Friday prayers outside a mosque in Lucknow, India today 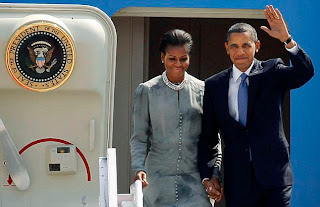 Once Again...It's Time To Release The Kraken

WARNING: DO NOT CLICK TO ENLARGE. (she looks even worse all big and shit)

An Entourage Fit For An Emperor


Obama will make history for more than one reason during the Nov 6-9 visit. This will be the first time a teleprompter will be used in the nearly 100-feet high dome-shaped hall that has portraits of eminent national leaders adorning its walls.
Indian politicians are known for making impromptu long speeches and perhaps that is why some parliament officials, who did not wish to be named, sounded rather surprised with the idea of a teleprompter for Obama.
"We thought Obama is a trained orator and skilled in the art of mass address with his continuous eye contact," an official, who did not wish to be identified because of security restrictions, said. 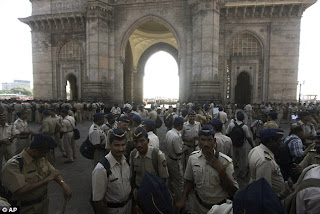 Their command over the English language has unwittingly landed nearly 300 city cops in virtual confinement as they have been assigned duties at the Taj and are not allowed to leave the hotel till US president Barack Obama leaves on Sunday afternoon.
The officers, holding ranks of sub inspector, assistant sub inspector, inspector, senior inspector and assistant commissioner of police were handpicked by their seniors for their communication skills in English, apart from general police training.
The 300-odd officers will work in tandem with highly trained 300 US security men, forming the inner protection ring guarding the US president during his stay at the Taj.
Posted by Fits at 11/07/2010 03:57:00 AM

Ever notice how his "eye contact" is always in either of two directions, with maybe a brief look now and then at the camera? That's where the teleprompters are!

He's basically the stepford president. NO ONE who spends his entire adult life reading from a monitor can even begin to act normally, the brain doesn't work like that. It bespeaks a laziness of epic proportions, or a congenital problem with short term memory. Because the prompter is always moving there isn't room for extemporaneous expression, but not everyone catches on to the robotic monotone, as is clearly evidenced by all of the bad theatrical actors that remain gainfully employed.

Just like most of the people who've learned English by some sort of hooked-on-phonics program cannot spell to save their collective lives, those who've been trained to read rather than learn simply can't emote in anything resembling a human manner, and to the ones who CAN, they appear stilted, dry, and toneless. From the very first speech I heard the man give, to this very day, my ear picks him up as worse than many modern robotic audio programs that simulate the human voice. Then again, many of the great orators of the theatrical profession, as well as politics, have always said that learning to be a Marine means learning how to act for the times when you simply have no choice but to at least appear human.